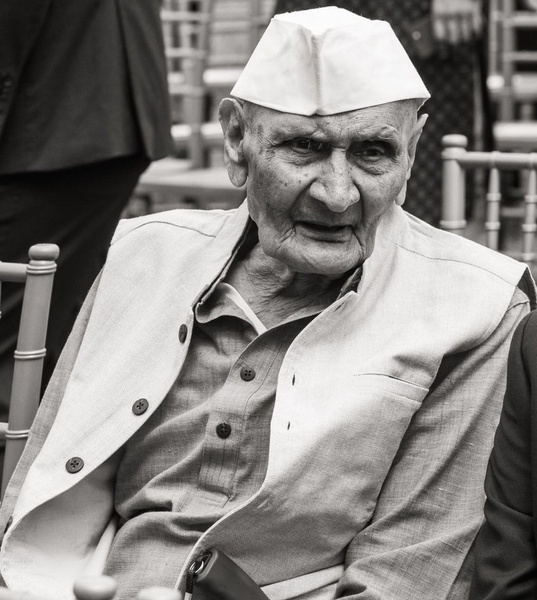 With heavy hearts, we announce the passing of Natawarbhai Dahyabhai Patel on May 20, 2022. He passed peacefully among family in his hospital room in Lakewood, NJ. He was 97.

Natawarbhai was born into a Jain family in the town of Etola near Vadodara, Gujarat, eventually moving to Bhadran where he was raised. He was the youngest of 6 siblings, 4 brothers and 2 sisters, taking on the role of patriarch as time wore on.

A firm believer in Mahatma Gandhi’s teachings and principles, he devoted his time during early adulthood to the freedom movement, advocating for the peaceful and nonviolent end to British colonial rule in India. He valued discipline, routine, and commitment to physical health; he practiced akhada regularly, a form of Indian martial arts praised and also practiced by Gandhi. He was affectionately referred to as “Bapu” by his friends and followers, just like Gandhi was. He took part in many protests across nearby towns, often delivering messages about secret meetings and gatherings to drive awareness and gain traction for the movement. Kusumben Patel was also an active supporter of the freedom movement, leading to a beautiful new beginning after they first met. The two were arranged to marry in 1951 after meeting a few times through a mutual friend.

After trying for years to secure a stable job in India, Natawarbhai finally found a role in the business sector in Malaysia, departing in 1953 for a 7-day journey by steamboat. Kusumben followed in 1956 once things were stable, and the couple started to immerse themselves in Malay culture and language. In 1959, upon learning about the poor health of his mother, he rushed to arrange a trip back to India and chose to fly. Given how new planes were as a mode of transport, but because he believed in the innovative technology, he took out a loan to pay for his flight!

Natawarbhai and Kusumben raised 3 amazing children in Malaysia, eventually uprooting them to India in 1969 for the sole purpose of providing them with the best possible education. They then went on to build families of their own, and in 2001, Natawarbhai and Kusumben moved permanently to America to be with their son, Shashin, and their daughter, Asmita, and their families. Because of his good health and strong disposition, he was able to visit India numerous times over the past two decades to visit his youngest son, Amrish, and his family, and spend time in his motherland.

Natawarbhai was a true activist through all of his 97 years. He kept up with current events and politics around the world, often making remarks about the stock market and its implications on the financial well-being of his granddaughters. Despite never being 100% fluent in English, he managed to make friends, contacts, and a successful life for himself and his entire family because of his passion for social connection and overall selfless nature. Over the years and up until the very end, he donated to numerous causes, contributing to charities in India and in America. His legacy will be carried by his family always, and will live on to future generations.

Funeral puja services will be held on Saturday, May 28, 2022 from 10:30am-12pm at Holy Cross Memorial Park located at 840 Cranbury South River Rd, Jamesburg, NJ 08831. Masks are strongly encouraged. For those who cannot join in person, you can view the livestream here.

In lieu of flowers, the family requests that donations be made to Sri Krishna Goshala, a nearby cow sanctuary that Natawarbhai was very passionate about supporting. If you wish to donate, please click the link above, navigate to the upper right corner and click "Donate." Then choose the amount and payment method, and indicate the following in the comment box (labeled “Add special instructions to the seller:”) to ensure that contributions are made in his name: “Pujya N. D. Patel, Howell, NJ - Goshala.”

Arrangements are under the direction and care of Raritan Bay Funeral Service at 241 Bordentown Avenue, South Amboy, NJ 08879

To order memorial trees or send flowers to the family in memory of Natawarbhai D Patel, please visit our flower store.
Send a Sympathy Card